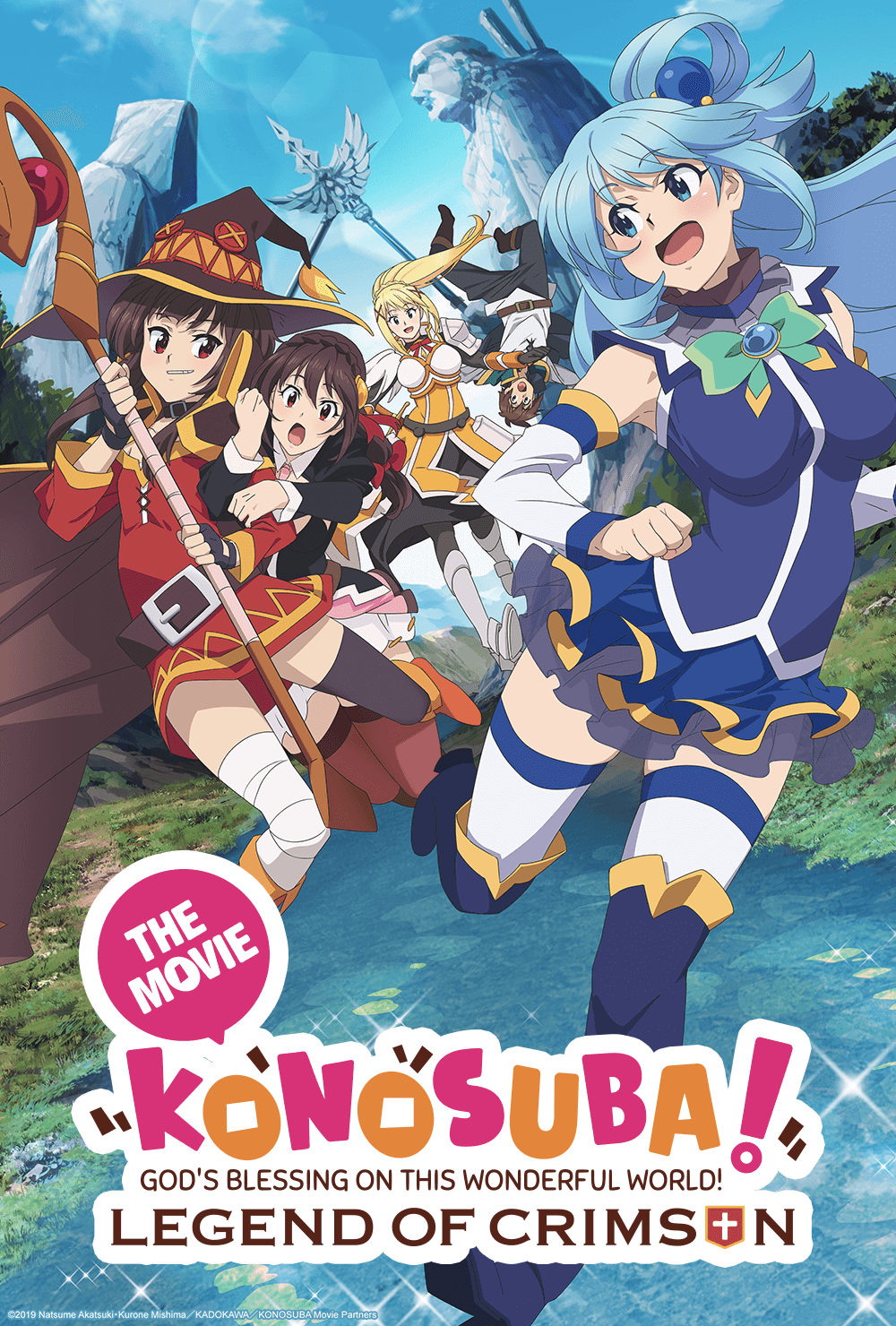 Konosuba has blessed us with Legend of Crimson this week in North American theaters and with it, we see our favorite band of misfits take to the big screen. The movie is a perfect follow up to where the second season left us and introduces us to Megumin’s family.

Our favorite Chuuni takes the forefront along with her friend Yunyun. Where the second season focused on Darkness’s past and family, Legend of Crimson is focused on Megumin’s family and clan. The movie plays out as a continuation of the story, with its zany pace and witty humor, as we’re introduced to the Crimson Village clan. If you thought Megumin stood out, you’ll quickly find out why she is that way; her entire clan is just like her with their exaggerated introductions and comical poses.

The movie opens with a massive explosion that results in the gang failing a quest and killing off the tuna in a reservoir. Then it transitions to the next scene using the traditional Konosuba transition screen with chibi versions of the characters. This is constant throughout the movie and makes it feel more like a combination of episodes rather than a movie. From there, we see the typical humor of the series play out; Kazuma being annoyed with his party’s incompetence and then the women in the guildhall calling him scum and trash, since he remains the pervert we remember him to be. The humor and banter in these moments are on point and offer great opportunities to reminisce on the series, that hasn’t had any continuation until now.

It is a great feeling to see that Konosuba has not lost its beat over the two-year wait. That said, there is a point when the humor just grows stale in the movie. Roughly 2/3rds of the movie has the same gags recycled; Megumin’s mom attempts to make Kazuma sleep with her daughter by using magic to put everyone to sleep and locks them in a room together. It makes for great comedy, but its repetitiveness grows old fast. When the main antagonist of the movie, Sylvia, a General of the Demon Lord’s army appears, the plot suddenly grows serious. In pursuit of a weapon to avenge her army, Sylvia wishes to destroy the entire Crimson Clan in an act of retaliation.

Despite being a serious situation, the plot still takes its time to focus on the comedic moments rather than letting the characters grow and come together to defeat the threat. We understand it is in their nature to avoid serious conflict because of how weak they are, that’s the joke. But there are times in the series when Kazuma, Darkness, Aqua, and Megumin decide to get serious and devise a plan to overcome threats. That still happens in this movie and the payoff is well worth it, but the time between then squanders further opportunities to really flesh out their development.

When Sylvia is introduced, the controversial joke is made that she is a chimera with both male and female genitalia. A lot of people took this joke one way or another, but in the end, there is truly nothing controversial about it. She is a chimera that absorbs anything she encounters, so she can be part machine; fusing with the weapon as we see at the end of the movie and become a kaiju. When she kidnaps Kazuma, he admires her beauty, and she notices his worth; while Megumin, Aqua, and Darkness do not respect him. Then the joke is dropped and everyone is taken aback, but never do they insult her about it. Instead, it’s just one of those moments where the fun and games just stop.

What makes Svylia the villain is that her thirst for vengeance consumes her and she crosses a point where there is no coming back from. All she wanted was to be loved, not just admired by her troops but to know what it felt like to love someone. She experiences this in the end when she must be put to rest, as her humanity has already long since been dead.

This plot focus on love is loosely what the story is all about. We see Megumin open up about her past with Yunyun, and we finally see that payoff in character development. The final third of the movie is deeply moving and touching. Everyone drops their caricature personalities to come together and devise a plan to save the Crimson Village. We see that Kazuma does like Sylvia to a degree, and we never fully know with him, but he is accepting of her and it’s because of that, that they are truly able to win.

Once all of the jokes are out of the way, does Legend of Crimson truly shine?

With the side characters receiving some screen time, long-awaited character development, and touching moments of character interactions; it does. Legend of Crimson is a fantastic continuation of the series, with on-point comedy combined with fantastic character development. Although the jokes hog too much of the attention, Legend of Crimson has its moments where you’d wish there was more content to flesh out the story. Overall for a movie, it’s enjoyable, but squanders the opportunity to advance its characters further.